Today at dawn, an evacuation was carried out by the repression forces of the Greek state in the occupied MUNDO NUEVO building in Thessaloniki.
The building was occupied for 7 years by the group for social anarchism Black-Red.
It had a great social work in the city.
It provided housing, gave solidarity to refugees and immigrants, to fired striking workers, organized marches and actions with anti-fascism as a key element.
It had a populous anarcho-feminist collective the Free Women.
It was a safe place for every oppressed group in the city.

In the coming days, solidarity actions will be held throughout the country to defend the occupation. 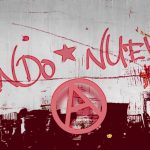