WHY A MOBILISATION AGAINST 41 BIS 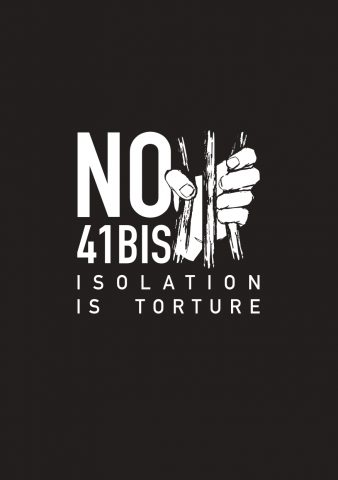 41 bis is a special detention regime in Italy, also called “hard prison”. This measure was introduced 30 years ago as a temporary, emergency measure, but has gradually become normalized and tightened over the years. The purpose of this special regime is to cut off all contact from inmates to the outside world and
between inmates themselves.
The 41 bis was created to lock up those accused or convicted of ‘mafia-type associations’, but was soon extended to prisoners with ‘links to criminal, terrorist
and subversive associations’.

41 bis consists of:
» 24-hour camera surveillance in cells and bathrooms;
» isolation for 23 hours a day;(it is possible to meet and talk to other prisoners- max.3-only during the rec time);
» censorship and post restriction;
» a ban on receiving books, prints and magazines from outside;
» having a maximum of 3 books (authorized by the prison) in the cell;
» visits from direct family members only (one hour a month) and prevention from any direct contact by means of windows, cameras and intercoms; Children under the age of 12 can only hug their parent briefly under the close supervision of an agent;
» 10 minutes of recorded monthly phone calls, with a family member who must
go to a police station or a prison to identify him/herself;
» exclusion from access to “benefits”, penalty discounts, alternative measures;
» a video conference trial: the inmate follows the trial alone in an equipped cell
in the prison, via a video link managed at the discretion of judges, prosecutors,
law enforcement agencies-therefore deprived of the possibility of being in the
courtroom;
» the use of the Mobile Operational Groups (GOM), the special group of the penitentiary police, which is at the center of heavy controversy and complaints in
the wake of beatings left in Bolzaneto during the G8 in Genoa;

At 41 bis there are today 747 prisoners in 22 sections throughout Italy. The 41 bis
regime lasts for 4 years, and can be continuously extended for a further two years
indefinitely. The only way to eliminate the existence of links with mafia and subversive associations is to “collaborate with justice”.The coercive dimension of the 41 bis regime is obvious: the only possibility of getting out of it is to indicate third parties as perpetrators of the crimes of which one has been convicted.

TORTURE:
Physical or moral coercion for the purpose of extracting confessions or
statements.

WHY A MOBILISATION AGAINST 41 BIS

Today, more than ever before, 41 bis is used as a warning to comrades, in and out of prison. It is an instrument of control that is becoming ever stronger and shows what our society is: a society where it is normalized to defend the privileges of the few to the disadvantage of the many, especially by using prisons, borders, economic crises and the destruction of entire geographic areas. Just as refugees and displaced persons, the ranks of prisoners are swelling, and the number of crimes punishable by imprisonment is also increasing. This growth in repression seems almost physiological and leads to the intensification of punitive regimes and the
ease with which they are applied.

Neo-liberalism -through financialisation- creates profit out of nothing and disposes
of those sections of the population that are incompatible with its aims of concentrating wealth. If our society tends to man-age populations according to their exploitability, even more so it aims to permanently eliminate all forms of subversion and autonomy towards the current conditions. The state strikes and punishes, through its monopoly on legalised violence, in the name of democracy and apparent freedom.

The 41 bis is the most extreme coercive instrument in the hands of the state, which -through isolation- institutionalises torture, de-humanisation and the annihilation of the human being. The 41 bis was created to lock up those accused or convicted of ‘mafia-type associations’, but was soon extended to prisoners with ‘links to criminal, terrorist and subversive associations’. The definition ‘highly dangerous’ was, and still is, a subjective assumption. This ‘label’ led to the detention, under 41 bis, of militants of the “Nuove Brigate Rosse” in early 2000 and now, for the first time, to the anarchist militant Alfredo Cospito.

The number of prisoners, especially political prisoners, is growing, and they are of course not spared from this “special” kind of detention. The warning is clear:cutoff all communication with the outside world, repudiate ideals, cooperate with investigations. The 41 bis shows us how an emergency practice of the state may become a permanent practice when it proves to be an effective instrument of control and propaganda. The state has tested this detention tool, verified its effectiveness
and organized for its usage.

We want Alfredo out of 41 bis and the end of this prison regime for all!
We invite our comrades and anyone else who wants to join our fight!
The fight must be total, without limits, with any means necessary!

AGAINST ANY PRISON
AGAINST ISOLATION
NO 41 BIS 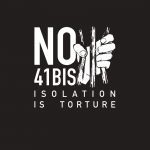 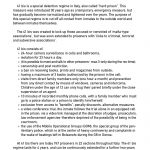 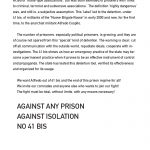