Solidarity with the four persecuted comrades for the eviction of Gare 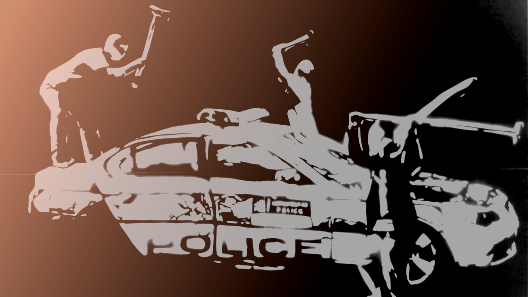 On September 29, the trial against two comrades from Berlin and two comrades from Athens will take place in Evelpidon Court in Athens. On November 26, 2017  the four persons were arrested during the eviction of Gare Squat, in the Athens district of Exarcheia. Among other charges, they are accused of trespassing, attempted serious bodily harm, refusal of forensic identification and possession of explosive materials and explosive bombs. This eviction was the first of three upcoming in which the four comrades were detained for 4 days. They were released on conditions or bail and now, almost four years later, have to appear in court. Almost one month after the arrest of the anarchist revolutionary Dimitris Chatzivasileiadis, who was for 1.5 years underground, accused for being a member of the guerrilla group „Revolutionary Selfdefense“ and one of the four arrested during the eviction of Gare on November 2017.

Gare was a squatted house in Exarcheia area, in the center of Athens. For many years was a living space actively going against private property and the establishment of a house as a commodity.Trying to promote a communal way of life in which terms like private were always questionable. People could not just have one private room, but the it was a fully collective space, there for those who need it, making the words collective and communal praxis. But Gare was not only a communal way of living, it was also  a political active place, where people get organised and politicized. In order to become an island of liberation and not an island of freedom living there meant to be political active, inside and outside the squat. From participating in assemblies and different social struggles to provide selforganised infrastructure in the neighborhood of Exarcheia, Gare was not only „a scene related squat“ but had a social relationship to the neighborhood. By structures as the public bathroom and laundry Gare was offering it’s facilities to anyone in need. Open to internationals, Gare was also one of the few places that tried to integrate international visitors and fighters with the local struggles, try to break in action borders and national narratives, showing that our fights should and are connected. And as a place rejecting compromises with the state faced a lot of repression. Being criminalized from the media and targeted from cops Gare was on the focus of police repression, especially around important days for the local movement eg. 17th of November ( the anniversary of the resistance against jounta), 6th of December (the anniversary of the murder of Alexis Grigoropoulos). Actually the first eviction of Gare Squat, during which the four defendants were arrested, took place just before December the 6th.

Gare, was one of the multiple self organised and squatted houses and political places in Exarcheia. All together they were creating a neighborhood where terms as privatization, profit, egoism, state control were doubted in everyday life. For the last decades Exarcheia was a place where numerous houses have been occupied, among them a number from and for immigrants. Structures, as self organised hospital, food distribution, language courses, playground, political open spaces were existing in the area giving solutions in everyday problems and offering a place to organize, act and socialize. They were providing the space for meetings of different political collectives, cultural events and a basis for political discussions offering meeting point and infrastructure for the movement. All these places, where the struggle used to acquire territory, with combination of the regular clashes with police forces were composing a resisting neighborhood. A neighborhood where police presence was not often tolerated living space for ideas as self organization and autonomy to be developed.

The last years, especially after the electoral winning of Nea Dimokratia, squats all over Greece faced an extreme attack, a lot of them got evicted, some were militantly defended and some resquated. This attack in combination with the pandemic and the hard lock down, the antisocial and reactionary policies of the government created an unbearable situation for the local movement. Police control and harassment, high fines and repression were composing the life in the city. The situation changed during the hunger strike of the communist revolutionary Dimitris Koufontinas and the large student demonstrations against police presence in the universities. In the face of the hunger strike people found a reason to reclaim the streets, fight against state revenge. The height light of this period was the massive demonstration in the suburb of Nea Smirni against police presence in the neighborhoods (the demo took place after cops attacking people hanging out in the main square of the area) where are the struggles were connected and people from diverse backgrounds came together showing the social rage against the state management and the cops.

The situation in Berlin all this period was pretty much  the same. Many self organised places were evicted, this time under the R-R-G coallition, some of them were defended, and all of them gave the opportunity to the scene to get radicalized and more connected with big demostrations, actions, discussions. The state management of the pandemic was also problematic. People’s life was treated as numbers and our social life as a complicated mathematical operation (calculating everytime the number of households, and the people you can go out with). Police presence and intervation was leading to clashes in different areas, such as the Gleisdreieck park, Monbijou park and Mariannenplatz where people harshly attacked the cops.

Every area is different and the struggles taking place diverse. But for us, looking outside their borders we recognize many similarities and common struggles. As Radical Solidarity coordination, people that came close during Dimitris Koufontinas hunger strike, international solidarity is one of the most important topics on our agenda. Recognizing common state strategies and repression tactics, police operations and pacifying campaigns but also recognizing commons problems and obstacles, common perspectives and analyses we believe that solidarity should be borderless! That’s why we stand next to the four persecuted people for the eviction of Gare, showing that fights do not recognize national borders!!

SOLIDARITY WITH THE FOUR ARRESTED PEOPLE DURING GARE EVICTION