Against Property And Every Authority. Radical Solidarity Coordination Call For An Anarchist 1st of May. 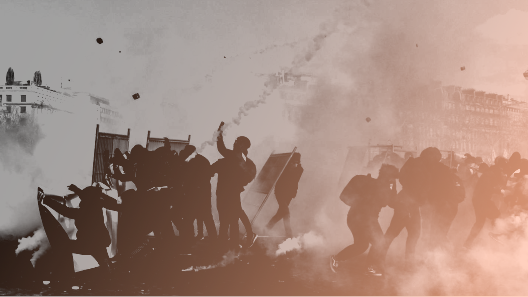 Property is not an inalienable aspect of humanity. It is not a given that we pay our rent every month to landlords, neither is it written in stone that we sell our labour. Landlords and corporations are no more entitled to property and the means to exploitation they gain from this, than western powers have are to the resources of the global south, continually stolen under the guise of progress. Rather, these mechanisms of exploitation rely on the existence of various repressive institutions.

The history of the concepts of property and crime, and the modern day carceral punishment and policing that goes with this, are inseparable. As capitalism became the dominant economic system in the west, it relied on prisons and police forces to aid its colonial/imperialist expansion abroad, maintain a rigid class system at home, and enforce a strict patriarchal familial model in the home, based on male property rights, in order for this new work force to function to its needs. In the name of increasing the property and wealth of the colonial power, territories were seized abroad. Simultaneously Europe saw the enclosure of vast amounts of common lands, resources and customs and the creation of an industrial working class cemented in their position by industrialists claiming a monopoly on property. Women experienced the appropriation of their reproductive and care work as an unwaged part of the industrial workforce. This process led to both dissent and the existence of a surplus population which while not integrated fully into the working class had also been removed from its common means of subsistence. Policing and the modern day prison quickly became integral both in the suppression of protest, the management of this population, and the enforcing of patriarchal norms; methods of policing were originally tested in the colonies before being established in the cities of Europe. Arguably the worlds first fully established modern police force, the Thames River Police, began as a way of controlling dock workers who not only were prone to industrial action, also saw it as a common right to supplement their shit wages by expropriating some of the goods they unloaded.

Today, this model of policing is global, and increasingly militarized, digitalized and aided by constant technological advances. At the same time incarceration and punishment have become a huge industry. More and more commons are enclosed: with private property as its defense, inner cities become ghettoes for the rich, foreign imperialist expansion continues unrestricted, forests, wetlands and entire valleys are destroyed or enclosed to make way for infrastructure projects and even the air we breath is taken from us by the petrochemical industry. Here in Berlin we witness how this ruthless destruction of commons in the name of property is aided by policing and prisons.

In Kreuzberg the police patrol our parks and plan a new base in the middle of Kotti, amounting to nothing short of an outpost in the racist, classist control and takeover of the neighbourhood, where working class communties, people on the margins and those who choose to militantly defend their beliefs and spaces are pushed out, their spaces and ways of life forcibly removed from them in order to clean the area for new residents.

At BER Schönefeld airport refugees fleeing are criminalized, detained and deported. Oppression hides it work, by numbing people with l.e.d window displays and discount alcohol. While the middle class continues to pull the wool over its eyes, taking low-cost flights with easyjet, just a few metres away people without German nationality are put in detention in the deportation prison controlled by the German immigration office located in the airport, which is set to be expanded in the near future.

The continuous exploitation and enclosure of natural resources across the world brings ecosystems to the point of collapse. Resistance to this destruction is targeted and isolated, with authorities fearing the connections that could be made between struggles in the global north and south. Solidarity, which is dangerous for the system, is repressed to avoid international connections being made. Accross the world, protest against capitalism and its dogma of property is further criminalized repressed, with the expansion of anti-terror and anti-protest legizlation.

Despite their seemingly omnipotent presence in our lives, property, and the authorities that serve it are not…They are new ideas, new concepts imposed upon a rich tradition of common living and use of resources that we have not yet totally lost, and through which we can find tools for a better future. The huge increase in repressive apparatus seen over the last few years is nothing more than capitalism’s attempt to bolster and further develop its monopoly of property at a time where crisis after crisis reveals its struggle to maintain itself and grow.

Join us in our rejection of the dogma of property and the systems of oppression it creates. Together for an anarchist 1st of May.