During a witch hunt, pride is hidden in the fire beam. 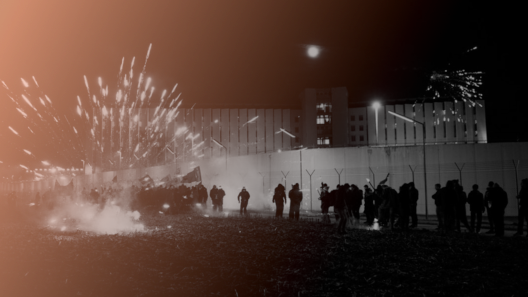 Thanos Chatziaggelou: During a witch hunt, pride is hidden in the fire beam.

Since the first day of my arrest, I have consciously chosen to keep a consistent position and refused to cooperate with the prosecution and interrogation authorities. Every time I spoke, I did it to claim certain historical and political responsibilities. Responsibilities towards my individual and collective path in the acts of revolutionary violence, as well as towards two of my comrades, on whose names from the very first moment the anti-terrorist unit tries to personify the lost pieces of the puzzle of the so-called deracination of Anarchist Action.
In this case, beyond what is objectively true and what is a lie, the greatest danger lies behind the political goals of the anti-terrorist unit. So, what are the shocking pieces of evidence of the service, infamous for its methodical lies: A ridiculous anonymous phone call that names me personally as the one responsible for a set of arson attacks in the region of Thessaloniki (a phone call whose number I assume is going to be missed in the trial by the hackers of the service), surveillance of ambiguous quality and origin taken from my personal daily life, my arrest together with my companion Georgia Voulgari in the house of Panos Kalaitzis, where I had in my possession a set of confiscated items that are named as “arsenal” and two clear political statements: the common responsibility claim of one and only arson attack at the FNRC from me and my companion and my personal responsibility claim of being a member of the Anarchist Action.

So, I will ask my own questions in the face of the investigative lies of a process that put 3 people in pre-trial detention because it just wished to; how are the comrades Voulgari and Kalaitzis named as members of the Anarchist Action without the slightest reference of them in the action of the organization? How is a fragmented action of revolutionary violence included in the strategy of an organization that has as its inviolable principle to claim responsibility even for its mistakes? How is a set of confiscated items named as the arsenal of Anarchist Action? While having unreserved appreciation and respect for the political composition of my companion, how did they prove the participation of 22-year-old young person in an organization that has been active for 6 years, which means that she was objectively in another city and still going to school? How is the comrade Panos Kalaitzis identified as a member of the Anarchist Action in a case file in which his name is never mentioned in any action, surveillance, common meeting etc? The answers to these circles of rhetorical questions can be found in the strategic goals of the anti-terrorist unit, which uses human lives for revanchism and power games.
For decades now, the anti-terrorist unit has been trying to portray an inviolable “terrorist” pattern using the faces of people participating in revolutionary organizations. According to this model, the “terrorist” is an anti-social subject, isolated from social processes, without any contact with any structures of the movement, where all of his daily life (relationships, actions, movements) is related to his Organization. For almost two decades I have chosen to publicly stand with anarchism. I have supported and participated in countless social fields that were about to be reference points of the struggle. In squats and self-organized spaces, in popular assemblies and processes of the movement, in events, demonstrations, conflicts, sabotages and attacks. I have acted in both the social and the underground sphere. Therefore, based on the modus operandi of the anti-terrorist unit we must either assume that the Anarchist Action (A.D.) is maybe the largest formation with thousands of members across the country or illegal spaces under the guise of self-organization and the processes whose dynamics overcomes even that of historical insurgent events, or that the whole case is a dead-end one. And yet, there is background story.

The anti-terrorist unit is trying to spread fear and terror in the social groups who choose to struggle in order to socially and personally isolate the ones who support the acts of revolutionary violence, let alone members of organizations. Whoever supports and walks besides them, whoever maintains comradeship, friendship even cooperative relations with them will be able to find himself accused or imprisoned carrying half the penal code with him. They don’t need any evidence; the germ of fear is enough for the movement to isolate the radical parts under the pretext of safety (personal or collective). The latest anti-terrorist provisions, which criminalize eve, the political-moral-financial support of prisoners for acts of revolutionary violence, are moving in the same context anyway.
And yet, in the face of this attempt of political and social isolation of the revolutionary intentions of the anarchist movement, we answer them in the best way since the first day of our arrest while going through the most dystopian paths. Against the repressive thirst for repentance, denial, backstabbing and betrayal of relationships and feelings we stand with decency, stability in front of the depth of repression, with solidarity we stand in unity, the one next to each other, even if we defend different paths. If the cost of self-respect for human dignity shows the way to prison, then we proudly defend it every day. Because even during the era of personalized narcissism there will be people that think of the one standing next to them. We do not negotiate about solidarity.

Direct liberation of the comrades G. Voulgari and Panos Kalaitzis
Either standing with repression or with the revolution
There is no middle ground