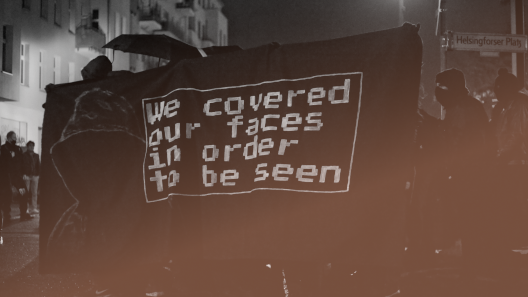 Another harsh winter of the coronavirus pandemic is coming. Cases have risen well above levels seen in the winter of 2020–21, and while many of us are vaccinated, we’re looking at potential increased spread because of the newly discovered omicron variant. Lockdowns are already returning to the most severely impacted Bundesländer, and while many of us are succumbing to crisis fatigue, the Querdenker and other conspiracy theorists may see any efforts to minimize the spread of the coronavirus as renewed onslaught against them and their “freedom.” Anti-lockdown riots are popping up around the world and Europe, and in particular the Netherlands. They are often dominated by right-wing extremists and conspiracy theorists. Should such riots appear around Germany, we need to continue to hold the line that this a three-way fight: we side with neither the State nor the insurrectionary right-wing.

The question is not whether the State-mandated measures are effective at decreasing infections. Many of them are. However, as anarchists we do not support the State enforcing these mandates because it can only be done through the violence of the police and courts, and moreover this violence is used in a classist and racist way. We can incidentally be in agreement with the State such as recognizing that safety belts in motor vehicles save lives. We just believe that such things must be followed voluntarily.

Where this can become difficult is how we can manage to resist State-imposed measures without allowing our message to be corrupted by the Querdenker or for fascist creep into radical left circles. The so-called Freie Linke are already one of the most obvious crossovers between the radical left and Querdenker, but not all fascist entryism or conspiratorial creep is so apparent. Not just in Germany but around the world there are left-wing conspiracy theories around the coronavirus. These beliefs include doubt around the efficacy of vaccines, ungrounded speculation about the long-term effects of vaccination, dismissal of the utility of face-masks against the coronavirus (often calling them “face rags” and even “muzzles”), a poor understanding of the medical science behind prevention versus treatment, and logical leaps about how and why the various States of the world haven chosen the responses they have. We need to have our own resistance that makes choices not just on gut feeling, but on a synthesis of anarchist theory and science.

We cannot allow the far-right, Querdenker, and conspiracy theorists to control the narrative and be the sole face of resistance to the State. We must resist the State on our own terms, and we must draw clean lines between our anarchist/antifascist resistance and theirs. On the surface, we both reject lockdowns and the authority of the State, but the clearest difference is that we on the left embrace science as a guiding principle on how to handle the pandemic, and they do not. Any meaningful counter-narrative against the Querdenker can cede no ground to them on the matters of science.

All messaging should continue to acknowledge that vaccination, face-masks, reducing social contact, ventilation of indoor spaces, and basic hygiene are key to handling of the pandemic, but that all such measures must be voluntary. If these are strong components of any radical left messaging, it will create a divide between us and the Querdenker. Failure to do this leads to the great danger of letting their messaging to mix with ours, and we cannot allow any so-called red-brown crossovers. Such red-browninsm is rampant in the US with pundits who name themselves as part of the left such as Max Blumenthal or Jimmy Dore leading a significant part of the left to align themselves with anti-science.

We cannot remain on the defensive either. We have to provide an alternative path of resistance to what the Querdenker offer so that people who want to counter State control are not funneled into Querdenker circles. This allows us to set our own narrative and recruit people away from the Querdenker. We can organize events, have info sessions, hand out flyers, and even engage in direct action against those who through inaction and insufficient action have allowed the pandemic to drag on and on. We are tired, of course, but we must be proactive instead of reactive, and we must continue to organize.

Anti-mandate protests are predominantly led by the anti-vaxx and Querdenker, so they must be opposed. That said, if there is a popular uprising within broader German society, for a day or a few nights or weeks, we may find ourselves on the street at the same time and in similar ways as the Querdenker. Like we saw antifascists do during the early days of the Yellow Vest uprisings in France, our task would be to drive out the most reactionary elements to help steer the movement toward a fact-based and egalitarian analysis. We can show up in our own blocs so long as our messaging via transpis and banners rejects the conspiratorial and anti-science foundation of the Querdenker movement. Of course, this is not carte blanche to engage with the Querdenker or their riots, and any groups that take to the street would need to be constantly reassess whether their actions are discernible from the Querdenker or whether this mixing leads to members of the left to sympathize with the Querdenker. It cannot be said at this time whether this strategy is feasible or foolish, but it is worth considering.

Above all else, we must remember that the ongoing crisis is caused by the States and pharmaceutical companies that have refused to share the vaccine patents and rights to production with the rest of the world. The State is the primary driver of the pandemic, but so are the Querdenker and their individual and collective actions. Society will be worse off should the Querdenker succeed with any of their goals: forcing politicians to take anti-science stances, shifting the Overton window so that sympathetic politicians may side with them, or even usurping the (alleged) democratic government. We cannot, must not lose sight of the nature of this three-way fight. We must oppose both the State and the Querdenker. The only way out of the pandemic is through global anti-national solidarity, through an anti-capitalist analysis, and with a complete refusal to work with reactionary elements.