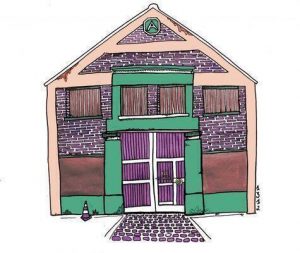 During October of 2020 people of the anti-authoritarian movement of Paris decide to occupy an old marble factory and bring back life to its ruins. In this way they decided to go against the social norms of the everyday metropolitan routine and live a life based on self-organization against all the parties and institutions. One part of Marbre is used for the housing needs of the people, providing a space of freedom against the gentrification of the Montreuil region (a region of the east suburbs of Paris) where new bio shops open every day, rent prices are rising while they try to cleanse the streets from all of us, the outcasts of this word. Marbre exists against all this status, since if the building has not been occupied it would have already been used as a foundation for new tourist apartments and lofts. It stands against the capitalist lifestyle promoting free contribution instead of standard payment, it fights for the demolition of prisons, speciesism and borders.

This is not the first time that the state acts against Marbre since during February of 2021 the squat was evicted for the first time, yet the people managed to reoccupy the building the next day. The next steps of the struggle for the house go with a trial taking place on June 2021 accepting the request of the people to remain in the building from 01.11.2021 until 01.04.2022 when the eviction of the buildings are more rare due to the winter period. However, the people in charge did not seem to care and signed the paperwork demanding the people to leave the building until the 23rd of September. The next legal procedure is on the 16th of November and until then Marbre is widely alerted, calls, and organizes parts of the movement in open assemblies, workshops and events in order to prevent an attempt of eviction. These events, also, have as a goal to deal with the stress, the fear, and the rage of oppression in the best way possible.

These attacks of the state of the rich work as a tactic that meets no borders. The state’s name may be different but what brings us together is the need for freedom, the struggle for a world full of laughter and dance build on the ashes of this old, miserable world. The attack against Marbre may not find all of us next to each other in the streets of the same city but the common struggle for liberation across the world is what deeply connects us in a way they will never understand. From the factory of Fabrika Ifanet which is, also, being threatened with its demolition-eviction after 17 years, until Marbre in the streets of Montreuil, we consciously decide to stand in solidarity at the right side of the barricades. They may evict squats, but they cannot evict our smiles, hugs and memories. They aim at the walls of our houses, but we will always show them that they can never get our hearts. Because we still yearn for the sound of the storm.

YOU WILL ALWAYS FIND US IN FRONT YOU, STONING YOU WITH THEIR REMAINS

SOLIDARITY TO THE SQUATS THAT ARE THREATENED WITH EVICTION.

OUR HAPPINESS WILL BE OUR BEST REVENGE AND THEIR WORST NIGHTMARE