Report of protest in solidarity with the anarchist Abtin Parsa 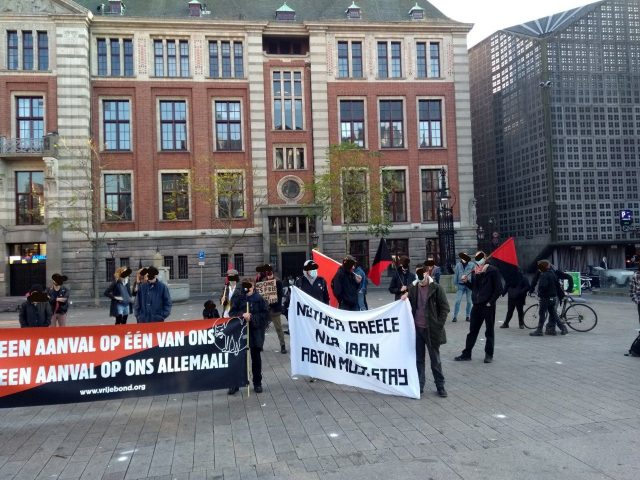 Last Saturday, 7-11-2020, the Anarchist Group Amsterdam organized a protest regarding the extremely dangerous situation in which the anarchist Abtin Parsa from Iran is currently in.

Below is the call for the protest and the background is also explained a bit there.
https://www.agamsterdam.org/niet-iran-noch-griekenland-de-vervolgde-anarchist-abtin-parsa-moet-in-nederland-blijven/

At 2 pm on the Beursplein in Amsterdam people started to gather. Soon we were almost 50 people, with different ages and backgrounds, and there were also quite a lot of people from outside Amsterdam, tribute for that!

There were banners and black / red flags, several people had made a protest sign from cardboard. And hundreds of flyers in Dutch and English were distributed to the passing public. There was a small sound system and various speeches were given alongside Abtin who briefly told about his situation. He wanted to emphasize once again that this is not an individual struggle against state and capitalism, but a collective struggle against systematic oppression of revolutionary movements that oppose the murderous neoliberal capitalism and hyper individualism of the modern “democratic” West. And that it is in everyone’s interest that we as anarchists must always show solidarity with those who fight against oppression in whatever form. That the long historical line of anarchism has always been the line of the class war, of the poor against the rich, of the workers against the bosses, of the powerless against the powerful.
It was a standing demonstration, because we were not allowed to move from the Beursplein by the police. Which resulted in a somewhat uncomfortable atmosphere that was totally out of line with the usual practice of anarchist / autonomous groups in Amsterdam. What unfortunately did not really get off the ground was shouting slogans in Dutch and English, but there will probably still be a second chance.

At 3:30 pm the protest stopped and everyone left on their ways.
No Iran, Nor Greece, Abtin must stay in the Netherlands!

Solidarity is our weapon! 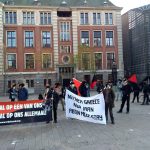