About the repressive operation and the defense of Prosfygika 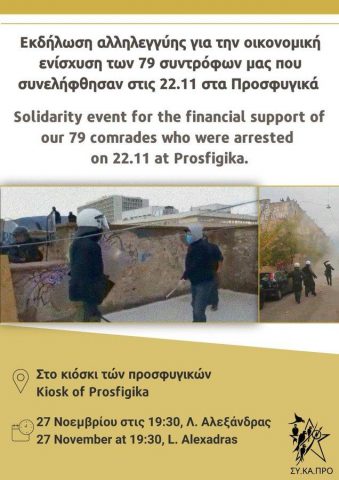 We are still here … The Community remains strong and united … Prosfygika will win!!!!

On 22/11/2022, at 5.45 am, all kinds of police forces, riot police MAT, state security, Delta, OPKE and EKAM, invaded the squated neighbourhood of Prosfygika on Alexandra Avenue and more specifically the 7th block, on Tikhonidos Street (behind the Elpis Hospital). They broke through the outer door of the building, breaking it. Then they went up to the second floor where two community companions, the arrested companion and another refugee from Iran live. They kidnapped both of them and proceeded to carry out a thorough search of the building. At the same time, the entire neighborhood was surrounded by the repression forces, not only at the site of the search but in total, attempting to occupy it.

The operation was spotted by the community’s daily morning patrol who began to inform the neighborhood. Comrades and compañeras took to the rooftops to wake up the rest of us. Not knowing exactly what was happening, we recognized that the operation was limited to a specific building, but we also realized the serious possibility of a general attack. In retrospect, we judge that the invasion that took place was premeditated from the morning. All the time that elapsed until the moment of the invasion was the result of preparation, judgment on costs and gains, as well as a measurement of our determination, by the officials of the GADA and the ministry.

As time went on, the situation seemed to get more difficult. The comrade remained inside the building, the police forces were not removed and the encirclement remained. The neighbourhood was becoming suffocating with the situation. We attempted to contain the riot police further in from Kuzi Street, that is, the vertical street that centrally separates the refugee blocks, so as to open up vital space for the neighbourhood, without obstructing the investigation, but making our presence felt. This allowed the neighbourhood to slowly leave their homes, some to go to their jobs and others to take their children to school. It also stopped the torture of our comrade, who was under captivity in his house for about 3 hours. At least as he informed us later, then, after the fireworks, they stopped and took him to GADA.

At the same time we were receiving more and more information and indications of a second operation that had been predecided and which would take place after 3.00 p.m., after the partial eviction of the two hospitals of St. Sava and Elpis. Around 12.00 noon we held a march through the neighbourhood and called an emergency advocacy meeting at the community shelter in the 6th block for 4.00 p.m. At 5.00 p.m., during the open publicly announced meeting, the repression helicopter and drone attack began in the air. The guarding shift resisted as best they could given the circumstances, using every means of non-criminal force, not only to protect against persecution disproportionate to the litigation, but also to protect the entire community, its children and patients, and the wider neighbourhood in general. A wave of terrorism fell upon the 5th and 6th blocks that left children and other people in the neighborhood in panic attacks that continue to this day. The Hellenic Police assassins broke down apartment doors with guns drawn, threatening anyone in sight, and attempted to impose a regime of terrorism. A sick woman in a wheelchair and her daughter, a family holding their children in a panic attack, a mother beaten and thrown to the floor in front of her 12-year-old son after their door was broken, migrants and refugees spilling into their homes and on the stairs, like an invasion of Gaza.

After the successful outcome of the operation that left behind heavy losses to the special forces of the OPKE-EKAM-MAT, the defenders of 22 November were arrested and subjected to beatings, plastic bullets, sexual assaults and torture tactics of prisoners of war. Among us, a Venezuelan refugee mother with her two minor children, a refugee from Africa, two Turkish political refugees, four minor solidarity companions, a pregnant companion who was torturously denied transport to a hospital, as well as the internationally acclaimed photojournalist Nikos Pelos, for simply doing his job. We were led to GADA, locked up 79 people crammed on the floors of narrow cells with constant lighting and minimal oxygen for hours, without being informed if we had been arrested.

The spirit of those arrested was never broken, our slogans inside the GADA cells were joined by the slogans of the solidarity gathering outside and the expulsion of the police from the neighbourhood. Our rhythms resonated … The anger and militancy did not stop even in the morning, but continued unabated during our long transfer to Kavala, our stay there and our also long wait inside the transport buses and at Evelpidon court. The ones whose morale was finally broken, were the state mercenaries.

The vindictiveness of the state and its mechanisms, especially of the fascist government of Mitsotakis, was also attempted in the mass solidarity gathering at Evelpidon. The repressive forces refused to deliver water and food from solidarity comrades. There, during the second attack on the solidarity activists, a comrade lawyer and militant, who is also active in the assembly of the NO METRO ON THE PLATIA, was beaten up, short after he was just been released, since he himself had been arrested. The cops and the government have never been able to forgive our just resistance and our dignified attitude, and this was evident not only in the violence of the repression, but also in the overblown accusations in a fascist style.

We want not to be victimized in the face of state violence, even though the accusations we face are disproportionate, even in the face of civil law, the product of precisely this vindictiveness, the criminalization of militants and the increasingly authoritarian state. This is something that should really worry us. But otherwise, there can be no struggle without a cost, we know the brutality of the state and it is our honour and duty to fall to defend life and struggle. We fought with dignity against superior forces. The 79 defenders of Prosfygika on 22/11/’22 fought for all 400 residents of the Prosfygika community and neighborhood and each and every one of them individually, against the murderous onslaught of repression. And we know that in the end we will get the bill. And that bill is always a positive one for those@ fighting for a just cause.

We warmly thank every comrade and collective body that stood in solidarity in defense of the neighborhood and its community. As well as for the multitude of messages of interventions, declarations of solidarity and calls for mobilization. Their camaraderie gives us strength and hope for the common ground of struggle on which we walk collectively and each one of us from his/her own position.

Even more, we want to stand by the attitude of the young comrades/as, who were the most courageous and self-denying. For their unyielding fortitude in the face of armed superior forces, plastic bullets and batons, on rooftops and parapets. By luck, no one was killed. They stood their ground to the end. This is the strength of the young comrades/as, and we must all believe in it. All of them did not just stand in solidarity with the Prosfygika Community, but truly for what it is, a community of the class oppressed. The militants, the anarchists the communists the refugees and migrants, the children and the elderly, the mentally vulnerable, the families. For each and every one of us.

We have not arrived here today from nowhere. For 13 years, with all our contradictions as children trained by this system, we have tried to build comradely and political relations based on horizontality, trust, solidarity and a common perspective. That is why today we can and do fight this battle with one mind.

We count the next period as a critical period for the survival of the Prosfygika neighbourhood but also a great opportunity for social legitimacy, the strengthening of our autonomy and an even stronger defence of our neighbourhood.

We ask everyone to inform the world about the social project of Prosfygika, in order to break the isolation and exclusion. We are asking companions/@s to come forward to strengthen the Prosfygika community. We ask everyone to stand in solidarity in whatever way they can.

For us it is clear. Through the targeting of our comrade, an attempt is being made to criminalize the neighborhood and the squatted Prosfygika community as a whole. The operation to criminalize the community and the Assembly of Sy.Ka.Pro by the paracrats of the parastate like Thodoris Panagiotidis is the real targeting of the repressive mechanisms against grassroots social projects and self-organized communities. They reek of state provocation.

The political positions, the organizational framework and the militant history of the Community and the Assembly of Squatted Prosfygika constitute the most powerful response to both state and parastatal planning.

SOLIDARITY WITH THE OCCUPIED PROSFYGIKA COMMUNITY

IF WE FALL, WE WILL FALL WITH THEM

WE WILL EITHER WIN OR WE WILL WIN

for financial support, please refer to the call of august 2021 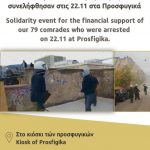