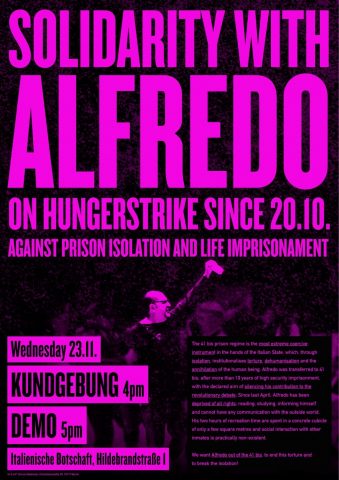 On the 23th November 2022 at 16:00 we will meet in front of the Italienische Botschaft (Italian embassy in Hildebrandstr. 1, 10785 Berlin) in solidarity with Alfredo Cospito, anarchist prisoner detained in Italy in extreme isolation (41bis regime).

At 17:00 we will start a Demo from that location to bring in the streets our anger.

The 41 bis prison regime is the most extreme coercive instrument in the hands of the Italian State, which, through isolation, institutionalises torture, dehumanisation and the annihilation of the human being. Alfredo was transferred to 41 bis, after more than 10 years of high security imprisonment, with the declared aim of silencing his contribution to the revolutionary debate. Since last April, Alfredo has been deprived of all rights: reading, studying, informing himself and cannot have any communication with the outside world. His detention is spent in a concrete cubicle of only a few square metres and social interaction with other inmates is practically non-existent.

Alfredo’s treatment is part of a wider constellation of measures taken by the Italian state to crush the anarchist movement, including:
– the 28 years sentence reserved for comrade Juan (who has also been on hunger strike since the 25th of October in solidarity with Alfredo) for having planted a bomb, which injured no one, in front of the headquarters of the Lega Nord (a right-wing Italian political party);
– the conversion of the sentence, from attempted massacre to attempted political massacre (the second includes the possibility of life imprisonment) for Alfredo and Anna, who have both been accused of planting a bomb (which also caused no injuries) in front of a Carabinieri barracks-school.

20 october 2022: Alfredo Cospito starts an hunger strike untill he will be released from 41bis isolation system.

During the last hearing, with Alfredo connected by videoconference, the judge prevented the comrade from reading a defence brief through which he set out the reasons for the beginning of his struggle. This was the only, and perhaps last, opportunity to communicate with the rest of the world. His contribution has been hidden from the public like everything from 41 bis.
If the lawyers decided to divulge it, they would face criminal consequences.

We want Alfredo out of the 41 bis, to end this torture and to break the isolation!

In solidarity with Alfredo on hunger strike! 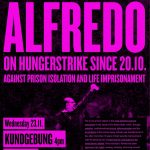