Brauni Stays! Against Gentrification, Against Evictions! 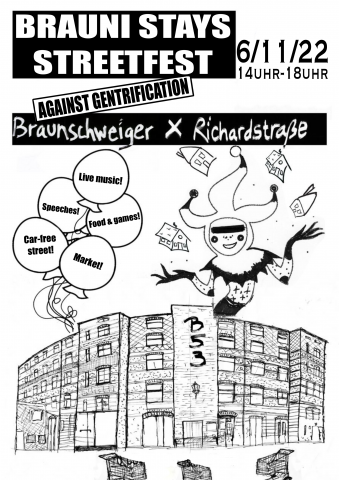 We as Brauni (the inhabitants of Braunschweigerstraße 53-55), reach out to you to call for your support as we stand today in the face of an eviction lawsuit.
Our very existence as a house and community is under threat by the greedy landlord Hak Hussein and his company Mat-X. Of course, this is not an isolated event. Greedy landlords, private housing corporations and predatory government policy have in recent years increasingly contributed to the gentrification of the city, leading to the further disenfranchisement of entire communities, homelessness, and systematic injustice.  Subcultures, safe spaces for marginalized people, and alternative housing projects all over Berlin are being destroyed in the name of a neoliberal agenda that protects private interest, safeguarding the few with money and their profit-seeking activities at the expense of the majority of the city’s inhabitants. Moreover, this housing crisis affects small shops, working-class people, and all of those who keep the city running as rents are becoming increasingly unaffordable and social housing vastly unavailable. Indeed, as most of us suffer the consequences of this system, we believe that the only way to challenge this can be in a collective way. We as the community of Brauni will not stay silent about this development and won’t let ourselves be displaced without picking up the fight against the rich aggressors attacking the very foundation of our day-to-day life, namely our house.

For two years we’re facing this eviction lawsuit. The owner claims that we extract commercial value within this house and that our fire safety and infrastructural electrical work is not safe to live in. The pathetic excuse of fire safety to evict housing projects has been used a million times over to evict alternative housing projects in the city.
Recent and painful examples of evictions in Berlin are the Köpi Wagenplatz, Liebig34, Syndikat or the Meuterei. ​​​​​​​The importance that house projects carry for marginalized people is exactly the fact of being the only places where we can exist, where the rent is still affordable, and where we can come together to support each other and work together to survive. A house with soli rooms, collectives that provide donation-based food, and events for solidarity and political purposes. There is no commercial profit we make, how ridiculous of a claim to come from a landlord, who owns two stores and multiple houses!

Who we are
Brauni is a place that was created, as an antithesis of collectivism against the increasing individualism in today’s societies. 12 years ago, the unused and completely empty industry building in the Braunschweiger Straße 53-55 was rented by a collective of people. With a huge self-organized effort, this place was built, repaired, and designed in order to host 50+ people. This included building walls, rooms, electricity, and water channels without any financial support from the owner. Today, Brauni hosts people that do not have easy access to the highly discriminatory and classist housing market.
Brauni is made up of precarious workers, queers, migrants, (political) refugees, and political activists.
We are all coming from so many different backgrounds, to continuously build our community. community approach of housing bringing together people from different backgrounds. Furthermore, Brauni has become a place of exchange, with a project room in which various political groups can organize, cook and have events and a sports room in which individuals and groups are self-organizing donation-based training. We are continuously looking for and inviting people to come into our space and open our shared spaces for our neighbors and community to involve themselves.
The very thought scares us deeply of what would become of this house and us when the landlord succeeds in evicting us.
Most likely this space will be misused to make a profit by a capitalist, and more than 50 people would lose their homes,  a place where they could train or come together. All of this to make place for a handful of people that could afford unimaginable high renting costs and would perfectly fit into the more and more gentrified landscape of Neukölln. And all of this in times when prices are on the rise and the economic crisis is affecting all of us.

The only thing that is left to us is to not give up without taking up the struggle against the rich attempting to play monopoly in this city again. Berlin has already lost so many self-managed political spaces, and enough is enough. Therefore, we do understand this struggle in the context of a larger fight against a city that if the rich succeed will be characterized by monoculture, yuppies, and unaffordable housing for anyone from the working class. But of course, as with any other political topics, we can not succeed on our own. We invite you to help shape our neighborhood with us from below. The Braunschweiger Straße is one street that is not fully gentrified yet and is a place for multicultural and diverse coexistence. Let us create a neighborhood based on Solidarity, where we can help each other in times of crisis. Let us connect with different neighborhoods and collectively struggle against the interest of the few at the top. Because in the end, we don’t fight only for our free spaces, we fight for a free world!

We invite you all to our first Kundgebung on the 6th of November, where we can enjoy and get to know each other on a Sunday afternoon from 2-6. There will be live music, speeches, info tables, food, games, cake, and coffee in the context of our current legal situation and connecting it to other struggles in Berlin and beyond.

Let’s unite our common struggles and come together to challenge Landlords and Kapitalist, etc. again and again. 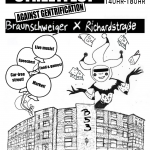