No show for sexists and racists! – Against the performance of Jordan B. Peterson in Berlin! 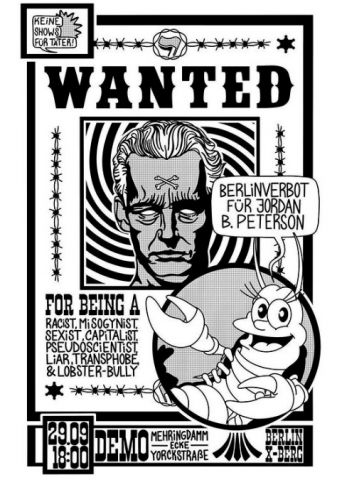 No show for sexists and racists!
Against the performance of Jordan B. Peterson in Berlin!

Alliance „No Show for Perpetrators!“
https://keineshowfuertaeter.noblogs.org/

On September 29, Jordan B. Peterson will be performing at the Tempodrom in Berlin. To most here in Germany, the name means nothing. The storming of the U.S. Capitol by Donald Trump’s supporters, on the other hand, where several people died, was an event that many will not forget. But what do the storming of the Capitol and the September 29 appearance at the Tempodrom have in common?

The extra-parliamentary right in the U.S. – called the „Alt-Right“ – has massively promoted and supported actions like the attack on the Capitol. One of its key figures and chief ideologues is Jordan B. Peterson, who will appear in Berlin at the end of September under a completely trivializing and empty announcement. Peterson has been supplying this mob of misogynists, anti-feminists, LGBTQIA* haters and neo-Nazis with ideology for years.

The rather trivializing term „Alt-Right“ covers various groups that are all on the right fringe of the political spectrum. What unites them is a misanthropic, backward-looking, anti-democratic and right-wing mindset. Donald Trump’s election victory would not have been possible without this movement on the streets and online. And the Alt-Right scene not only played a key role in driving the U.S. election campaign, but also helped the discourse of „new masculinity“ regain a stronger foothold among the general population. These developments not only encourage the spread of radicalizing subcultures, but also legitimize right-wing and radical-misogynist ideas. Thus, women-hating subcultures, such as the „incels“, also find a basis for their misanthropic views in this movement.

Who is Jordan Peterson?

Peterson is a clinical psychologist by training, but in recent years he has attracted attention primarily for his crude pseudoscientific publications and statements. Since 2014 at the latest, he has served as a dubious figurehead of the alt-right movement, underpinning it with supposedly intellectual studies and seeing himself as a defender of free speech.

Misogyny, anti-Semitism, racism, transphobia – Peterson feels at home in all these categories. „Political correctness“ and „social justice warriors“ are a thorn in his side. With his book „12 Rules“, he has provided the Alt-Right and all its currents with a theoretical basis that is bursting with anti-science theories: a man must be a dominant figure – women and female attributes would harm this „male self-realization“.

In his much-cited „lobster theory,“ Peterson claims that the brain and hormone structures of humans and lobsters are very similar. Thus, lobsters would always hold fights over territory, and female lobsters would surround themselves only with the winners of these fights. A sexist theory that is also widespread in the woman-hating subcultures of the „incels“ or „pick-up artists“. With his theses he seems to offer them a legitimization for misogyny and antifeminism.

Peterson pushes his agenda mainly through the online media : He has got more than five million YouTube-Followers. There he is uploading videos about »the marxist lie of ‚white privileges‘«, »femsplaining«, christian fundamentalist subjects and other right wing topics. He is talking about people of muslim faith in a way, so derogatory and repulsive, that we dont even want to quote him in this Text.

Apologetically, he is pushing his fanatic ideology as a self-help program, radicalising in this conspicuous, yet effective, way mainly young men. His main points: The purpoted oppression of the white, heterosexual Cis-Male and »Tradition«. When Peterson and his Followers argue with a »Tradtion«, which, in the end, is nothing but pure Anti-humanism, than we will counter this with our own. Our Tradition means:

Not a Footstep to Fascism!
Ideology detesting humanity has to be fought against, where it starts!

Peterson should not be given a platform here or anywhere else. If the Tempodrom, one of the most famous venues in the capital, offers such a well-known right-wing agitator a stage, then this event must be disrupted! We will not allow, that the German fans of Peterson, who are full of admiration for the American right, wander through our city on this day undisturbed. Jordan B. Peterson has supporters in the „incel,“ „pick-up artist,“ or masculinist scene who have been responsible for countless assaults and several fatal assassinations in the recent years. Peterson and his toxic political agenda are thus breeding the perpetrators of tomorrow.

That’s why on September 29, it’s once again: no show for perpetrators!

Let’s not let it go unanswered that a fascist, racist, misogynist person is given a stage!

Solidarize against this potpourri of anti-human ideologies, scenes and groups, we need YOU ALL on the street on September 29!

If you want to support the call write to:
keine-buehne-fuer-taeter (a) protonmail.com 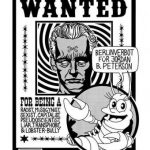