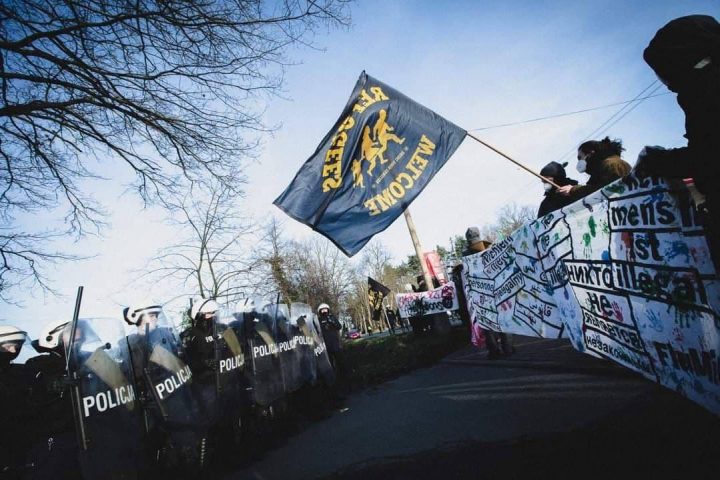 On Saturday, February 12, a spontaneous demonstration in solidarity with people imprisoned in concentration centers took place in Krosno Odrzańskie.

We gathered in large numbers (200-300 people) in front of the gate of the local Border Guard unit to protest against a system that takes away people’s freedom and is a telling example of Europe’s attitude towards the issue of migration.

The protest was a response to the series of strikes that continue to break out in the so-called „centers for foreigners“. At that time, there was a strike, among others, in the notorious center in Wędrzyn.

Strikes, hunger strikes, and suicides – people deprived of their rights are forced to use radical means of resistance. Overcrowded cells, no contact with family and loved ones, no information about their asylum procedure, fear of deportation and the uncertainty that comes from the fact that no one knows the date of their release.

We will not consent to the criminalization of migration, depriving people of their freedom, punishing them for their descent and violating their human rights.

We cannot remain silent. It is our duty to shout loudly and demand justice.

Speeches and testimonies of people imprisoned or with migration experiences were read in front of the gate of the Border Guard building. We think this is crucial because certain groups are still talked about without being allowed to speak. Discussions about the situation of women without the participation of women are not unusual in the Polish media. Similarly, the topic of migration – the narrative is built solely on the statements of border guards, police, and military.

The speeches were punctuated by samba performances and chanting of anti-border slogans.

We talked about the protest against migrant prisons and the criminalization of migration taking place in Lyon on the same day, pointing out that this is an international issue and what is happening now in Poland is only part of the global puzzle.

Then we all went for a walk around the center so that we could get to the windows of the building where the incarcerated are being held. Even though we were only moving on freely accessible and public land, the police started pushing us around. The armed arm of the state sought to escalate as usual. Batons and tear gas were used against the protesters. After several minutes, seeing the increasing aggression of the services we withdrew from the center, to the road where the police cordoned us off. Even though the people confined there posed no danger they were still beaten and sprayed with gas. The police randomly picked individuals from the crowd, knocked them to the ground, and dragged them to their cars. A squad of border guards appeared, also in riot gear.

Eleven people have been detained, nine of whom are currently charged by the prosecutor with assaulting an officer of the law. As a reminder, these were people who were randomly dragged out of the cordon just because they were holding a banner or megaphone.

At the moment we are in the process of organizing legal aid for the trials that await them in the future.

Now it’s time for all of us to support them. We will keep you posted on how you can help. Let us remember that our greatest weapon is solidarity!

This is what the day looked like. Although undoubtedly the Polish police crave attention so much that they dream of obscuring the essence and goals of the demonstration with their silly performances, we will not allow it.

As a reminder, in addition to giving encouragement to incarcerated fellow humans, we demanded specific changes.

We call on the European Union authorities to abolish migrant prisons and to stop repressing people on the basis of their place of origin. To put pressure on its member and neighboring countries committing human rights violations.

Enough of paying neighbors to kill migrants, enough of the politics of hypocrisy.

We call on the Polish authorities to abolish the closed „centers for foreigners“ and allow everyone to participate in their asylum procedure and await the outcome while not incarcerated.

We call for a serious migration policy that is based on a rational approach to this issue and offers realistic solutions that put people’s lives and health first.

We call for asylum for all who ask for it.

It’s time to lift the illegal state of emergency on the border and abandon the crazy idea of building a wall on the border with Belarus. This monument of disgrace that targets people will also cause irreversible damage to nature.

We are not calling on the Belarusian authorities to do anything. We know very well that human rights and democracy do not exist in that country. Therefore, may Lukashenko and all the officials who commit torture and rape rot in hell, which we wish them with all our hearts.

We call on the media, which have already lost so much of their mission to reach the truth and provide reliable information that they are content with announcements from the services. Having a public debate about someone without their input is a total travesty of pluralism and democracy.

Both during and after the demonstration, you continually asked us questions – who are we, why this form, how can we contact the organizers, who, by the way, did not exist.

Are you people fucking deaf? It’s time to get your shit together!

The whole demonstration was one big shout and demand to finally give a voice to people with migration experiences. When a finger points to the sky, only a fool looks at the finger.

If you are interested in this topic then go to the prison called a „foreigner center“. There are many of them in Poland. Demand to see the incarcerated and talk to them about their situation.

For your programs, instead of Bosak, Tusk, and Cejrowski, invite people who were forced to risk the lives and health of their families on the road to a Europe that prides itself on respect for human rights. We guarantee they will tell much more interesting things than those mentioned above.

Finally, give a voice to those who are beaten, imprisoned, and deprived of their rights.

That’s what you exist for.

We want nothing less than the destruction of Fortress Europe and the end of the global border system! 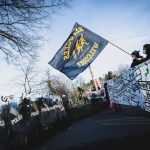