34 years are not enough! Solidarity with Biologica squat in Thessaloniki 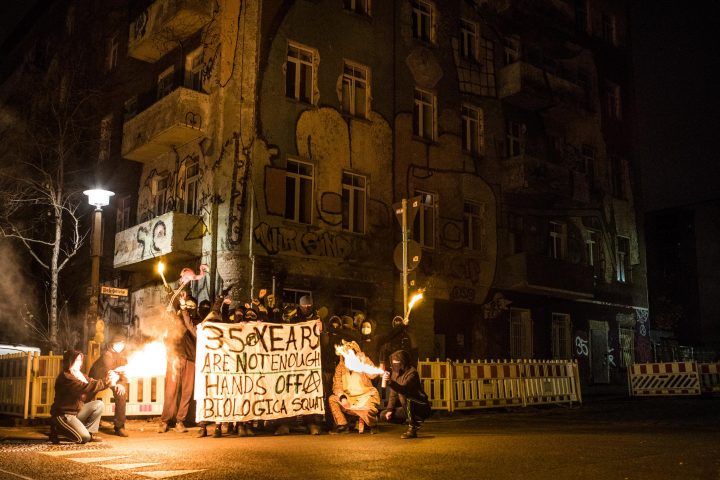 On Thursday the 18th of November members of the Biologica squat came across some changes in the internal part of the building where the squat intervenes for 35 years. They found a newly constructed wall in the place where toilets used to be, forbidding access to the people, as well as some „X“ signs on the walls making clear the possible destruction of the squat. The members found in a state’s online platform, the university’s plans of reconstructing the Biology department during the next 16 months formally signed οn the 16th of September with the squat turning into a waiting room.

Biologica squat has been a political and cultural reference central point for the city of Thessaloniki for 34 years. It has been the ground for many political and cultural assemblies, public events and workshops while supporting the DIY culture in every possible way. Through the years it has a space in the university campus that constantly shouts against discrimination, exploitation and every type of authority. It has hosted many open assemblies, collectives and has been one of the places in the city where people of the anarchist, LGBTQ, punk and student scene come together against anti-commercialism, gentrification and organise against the capitalist way of life that the city of the rich imposes on our lives. At the moment, Biologica squat is the home of the collective “Biologica”, a group of people supporting the DIY scene in anti-commercial terms, the Solidarity Fund for the support of persecuted prisoners and Terra Incognita, an anarchist collective supporting the struggle with all means. In the earlier years of Biologica, other collectives were also active while other groups supported the space by organising public events. With continuous political interventions in the university campus, the Biologica squat and other groups and individuals who are in solidarity with it, create grounds where manifestations, banner-drops, stickers, and other means strike against the university’s sterilized ideas and manage to bring into the offensive anti-sexist, anti-speciesism, anti-commercial and anti-authoritarian ideas.

The attack on Biologica squat under the pretext of the “reconstruction” of the Biologic department belongs to the broader state’s strategy to regain control over the universities as one of the points of intersection of it’s disciplinary power. The direct aim is to implement its hegemony in the university territories, to remove any radical political identity and structure in the student body, public spaces and to take away another common space of the antagonistic movement and radical individuals.

Not only to understand the state’s intention generally but to learn also the specific plans that aim directly at our lives gives a chance and a responsibility to the affected individuals and groups as well as the solidarians to find a strategy that aims not only at prevention but towards a wider perspective. The defense of our spaces against frontal attacks can be used to lead the struggle into an offensive situation with strong mobilizations and collective combative stance. Together with Biologica and many other threatened projects and squats there is the possibility to intensify the struggles in spite of all the differences between the cities that we live in and the national states that we have to oppose. We have to raise the political understanding of the nature of the states’ attacks in order to use evictions that are announced publicly to use them as a katalysator for our broader political struggles. This strategy has been used in Berlin over the last years with some success. The latest examples, where the state tried to gain a victory by attacking or taking spaces of the rebellious structures, were the eviction of Koepiplatz and the tried eviction of Rigaer94. Both times the resistance materialized in riots that were in front of the eyes of everyone proving the state’s inability to dominate our lives and our neighborhoods. Although the legal situation might differ significantly between Berlin and Thessaloniki, we see parallels. The fact that the plan to evict Biologica is now known gives us up to 16 month from now on to prepare for a confrontation.

Solidarity has no borders. We stand in solidarity with Biologica squat, every eviction has its price! 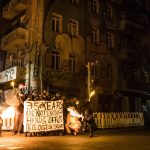