Which side are you on? 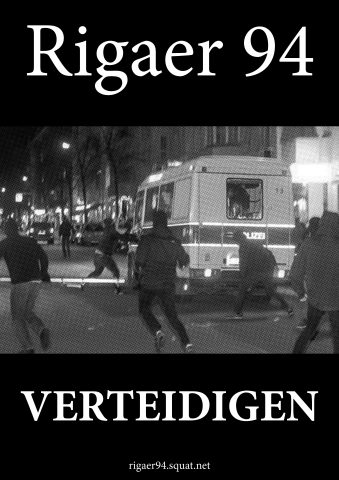 The time to search the conflict and intensify it is long overdue.  It’s time to go against the idea of property and the owners and take on the fight on our side, the side of the disposessed, the renters, the homeless. It is also time to resist against the occupation of our neighbourhoods, against the state and a society, that supports and contributes to its agenda and actions of systematically opressing and exploiting people based on racial ascriptions, drives away, displaces and excludes those that don’t fit or don’t want to fit in with the city of the rich. There is no reason to defend the existing and take the side of those profiting of the capitalist system. There are many reasons though to get organized together and rebel against state and capital, against authorities and its defenders and fight for the principles of selforganisation, mutual aid and a life in freedom and dignity. That is the context in which we see the defense of Rigaer94.

To us, this house is a place where we chose to live and fight collectively. It is a place of organization of different local and international struggles in which we involved ourselves over the years. As a piece of the ongoing resistance in this city. Against the policestate and with it the transformation of parts of the city into so called „danger zones“, in which cops harass, control and hunt people. Against gentrification, rising rents, real estate projects, the destruction of public spaces and forced displacement. Against social isolation, egoism and the narrative of „everyone fending for themselves“.

On the contrary we stand for selforganization, mutual aid and solidarity. For taking our lives into our own hands and defending ourselves against the omnipresent paternalism. For the experiments of selforganized spaces, spaces of the struggle and a life in a collective, without mechanisms of authoritarian and patriarchal oppression. Our open spaces Kadterschmiede and the youth space Keimzelle are meeting points that allow us to stay in exchange even when the social life is supposed to be frozen.

The attack on Rigaer94

For the 17th and 18th of June, the self-proclaimed facility manager Luschnat, the „lawyers“ Bernau and von Aretin and a so called fire security expert designated by them are getting ready to lead another attack against our house with the help of the police. They set out on the legal base of an ordinance by the district Friedrichshain-Kreuzberg, that is supposed to force everyone to tolerate a „site inspection to examine the fire security“ of all flats and rooms. It’s unlikely that this will be a „simple fire security inspection“, since everyone involved knows, that this house was turned into what is most likely the most fire safe house in the whole city, with the help of many friends in the past months. For a similar planned attack in march, that could be averted, 500.000€ for the Hundertschafts*-cops from different federal states were already spent. This fact points towards an action having been and being set up for a longer time period. We can imagine that the cops will again establish a „red zone“ a few days prior to the 17th and 18th of june, to be able to take the house by assault on the 17th, occupy the neighbouring houses and destroy walls, the fire safe doors that we installed, and many more elementary facilities in the house. Maybe Bernau, Luschnat and co. want to then declare the house to be „uninhabitable“. By that they could evict with the help of cops and private security everything in the house they’d want to. Finally they want their hired lackeys to destroy what we have built up. This would be a scenario similar to the eviction attempt of the summer 2016.

The political parties of the red-red-green senate, spearheaded by senator of the interior Geisel for the SPD, feel emboldened enough by the electoral campaign and the legal skirmishes, to dare what many have risked their political career on in the past: A fire security inspection with the goal of scouting for the next steps, a creeping eviction through the occupation of a whole neighbourhood and our house or an „all in“ on the big shock of a sudden complete eviction. We cannot predict what exactly is going to happen so we don’t want to fuel further speculation. All options are leading up to one point: Rigaer94 will be attacked, with the goal of destroying us. The day of the escalation is a Day X for us. We will react accordingly to it. But we won’t wait until then. Won’t hope on a success in a juridic sideshow. Not watch motionless, while once more they threaten our selforganization.

The year 2020 has been in many ways a special one, though not overall better or worse than the previous years. The capitalist normality was set up with further authoritarian measures in the frame of the covid pandemic and we all had difficulties finding our ways in this new situation, with curfews and contact ban, but also in dealing with the understandable insecurity around the dealing with the medical concerns of the pandemic. When we are now asking for your solidarity in defending Rigaer94, which is much more than just „our house“, we don’t ask you to fight for us. We want to fight together with you. We want to intensify our struggles together in the different places in this city and beyond! We want to be part in the different struggles and want them to find their expression also through this house.

We think we need concrete places where we can meet, get to know eachother and organize. After the eviction of Syndikat, Liebig34, Rummelsburger Bucht, Meuterei, the displacement of Potse&Drugstore and the acute threat to Køpi we have to defend the remaining spaces of the struggle in this city by all our means. We owe this to ourselves, our ideas, and those that fought before and with us.

But why to attack now, why take the risk now, why put us in danger of being overrun another time? 2020 and 2021 weren‘t just the years of the pandemic and generalized states of emergency. They were also the years of uprisings and revolts, bigger and smaller moments where the vulnerability of this reality came to the surface. The state is under pressure from different sides. In Berlin, an alliance caracterized mainly by migrant groups organized the 1st of may demo, which was for the first time after many years in fact combative. Not only in Neukölln, also in Kreuzberg and Schöneberg many people stopped accepting the harassment by police. The parks have become places of rebellion against the authoritarian state that tries to destroy any recreational moments, the chances of gaining experiences and developing an own expression outside of the societal norms. The „Take Back The Night“ demonstration saw this year 3000 FLINTA*, who didn‘t follow at all the cops‘ restrictions. After the rent cap was overthrown by the justice system tenthousands of angry renters took to the streets of Kreuzberg spontaneosly and were pushing away the suprised and overstrained cops. 2020 hundreds of thousands came to Alexanderplatz to share the rage against the murder of George Floyd.

The international flame of revolt is even more visible: against racist police violence in the US, in feminist struggles in Mexico, in Columbia, in Chile, in Malaysia, in Lebanon and in Algeria… even far away from being complete, this list shows that there were worse moments to participate in changing the world and realizing our idea of freedom. Maybe there were even not many better moments. Who of us can remember times like these, with such drastic changes like in the past year? We are convinced. Let‘s light another fire and poke it!

For us it‘s not important to have the same focus at any time or to use the same means of struggle to put into practice our ideas and to bring our dreams to life. We as Rigaer94 rather want to participate and grow in the fight against the capitalist, patriarcal and racist system. For a world free of domination, oppression, exploitation.

Practically we understand this as a call of duty to go into conflict with the existing in the next days and weeks . We take the attack on selforganized structures in this city serious and challenge our enemies‘ disposition to pay the price for the achievement of their goals. We will not be waiting behind the fences of the expected Red Zone in our vicinity until the last garbage of press and nazis was taken for a walk in our house. Again and again it became clear to us that juristic skirmishes and bureaucratic ping-pong will lead us to nothing. We actually fell into that trap and, acting against our political conviction, got a little bit pacified.

That is for us another reason to take care that the 17th of June will not become the beginning of the end of this house, but another step towards the selforganization of all of us. We want to create a scenario of counterattack together with you. A scenario that targets all those who profit from this system of daily expulsion and those who defend it.

We ask you to join and intensify the venture of attacking the daily order of the city of the rich. No matter if by voice, body, colours, noisy or silent, with stones, hammers or fire – lets show this sold out city, that we chose sides. Publicly, clearly visible or consipiratory in the remaining dark corners of this city. Let‘s show each other, that tenderness, solidarity, autonomy and self oranization are no empty paroles but the keys to our freedom, that we work on every day. Let‘s escalate our conflict against real estate companies and speculators, dynamic start-ups and their loyal followers, police, municipality and institutions within the vicinity of our neighbourhoods and beyond them – to take position.

If they try to break us, we‘ll explode!
Attack the city of the rich! For a hot summer!

-General Assembly „Intensifying the struggles“ | 6th of June 14:00 | Open Air in the Mehringhöfe in Gneisenaustraße

-Demonstration because of eviction attempt | 17th of June 20:00 | Friedrichshain-South