Not Under my Balcony! 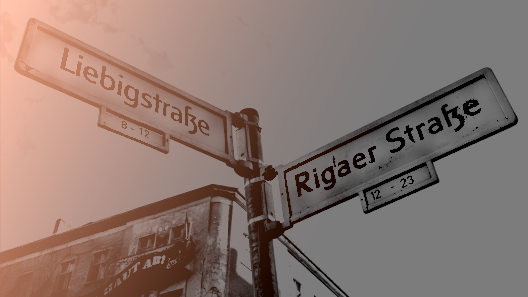 The space underneath balconies of the house Rigaerstr. 91-92a used to be a popular spot to be squatted – largely by people forced to live on the streets. The around the 2×5 meters large space protects from rain and (at least a bit) from the cold. Sometimes people stayed there for months and built their own little hut for living. Sometimes squatters shared the space or used it to have guests. Sometimes the squatters turned their squats into little manifestations – installing drawings, posters or messages on the outside walls of their hut. In most cases, the squatting was ended by the Ordnungsamt. Different to flats or houses, evicting homeless people from a spot they have squatted in the streets, needs no legal requirements and is mostly classified as „waste disposal“. The iron hand of the state shows itself especially in the dehumaniziaing and criminalizing dealing with homeless people, that do not fit into the picture of a fancy, rich and „clean“ city.

The spot of Rigaerstr. 91-92a got evicted regularly. Under protest from neighbours, in november 2020 a person was evicted from there with an armada of riot cops, a helicopter, the Ordnungsamt and a BSR truck. The practice of evicting people from their homes in the streets, happens all over the city: In january 2021, a hundred people got evicted from their camp in Rummelsburger Bucht. There, the senate, pigs and the fire brigade worked hand in hand with the so called „social NGO“ Karuna. The peoples‘ homes and all their belongings were destroyed during the coldest period of winter. Just to mention: last year 20 people froze to death on Berlin’s streets. While Covid19 is given as a reason for even less sleeping places being available this year, it seems no contradiction that the canteen of emergency accommodation in Lehrterstr. nonetheless hords 60 people a night squeezed on benches in one big room.In the midst of this housing crisis, just some days ago, large metal plates were installed in front of the before mentioned spaces under the balconies of Rigaerstr. 91-92a. So that the space had not been accessible anymore. The last person sleeping there was kicked out the day before. We do not tolerate such anti-social behaviour and have demounted those metal plates last night to give access to the space. They can now be squatted and used by people again. We do not tolerate the displacement of homeless people for the comfort of yuppies who don’t want to be reminded that owning a flat is a privilege. Anti-sleeping measures and security architectures are generally a shame for every neighbourhood.