April 24 – Free Mumia Free Them All protest in Berlin 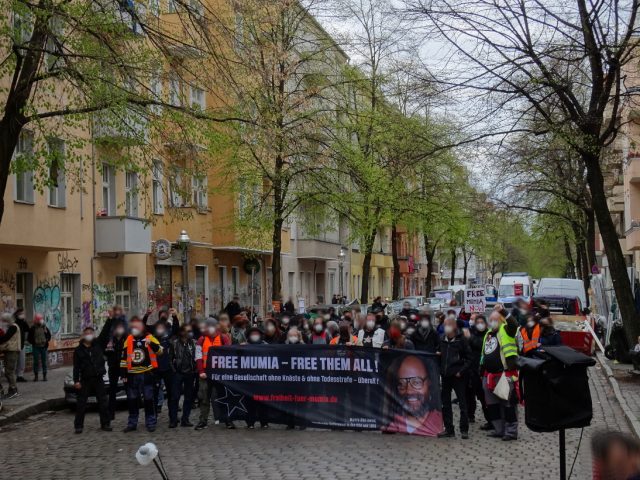 Yesterday, on April 24 appr. 200 people joined a protest for the freedom of Mumia Abu-Jamal in Berlin’s borough of Neukölln. Anti-racist organisations like Death in Custody and Migrantifa or prisoner support organisations like Network for political prisoners, Gemeinschaftlicher Widerstand, Criminals For Freddom, Sabot 44, no129 or the Red Aid all expressed their support for Mumia and what his struggle means for their own and that of others as well. VVN/BdA, an anti-fascist organisation founded by survivors of the Nazi death camps explained, why Mumia is an honorary member of their organisation. Neighbourhood organisations like Karstadt-Initiative, Syndikat or Deutsche Wohnen enteignen reported on the various struggles against gentrification and what that means to the livelihood of poor people ´in Berlin. A Prisoner was heard on the unhuman conditions at JVA Moabit via recording. Another recording was played on Lina, who is persecuted in the german region of Saxony for her antifascist activities. Musicians like Turgay, Müllsch, Yok, Mila Morgenstern and Elses Alptraum contributed live music.

April 24, 2021 marked Mumia’s 67th birthday. Mumia is seriously ill. On Monday of this week he had a heart surgery while being shackled to a hospital bed. Protestors demanded that he be treated accordingly to is ill health in a medical facility, not in prison and that the shackles be removed. Ultemately Mumia needs to be released on humanitary grounds because he is too ill to be in prison any longer. Only a month ago he survived a Covid-19 infection and his body is very exhausted.

Neighbours in Weisestr. where the Berlin protest took place decorated their windows with Free Mumia banners. An info stall provided postcards with which participants wrote get-well cards to Mumia. The petition to Philly’s DA Larry Krasner was avialable online at the stall and many signed it.

An exhibition on the US modern version of slavery a.k.a. prison industry was available and towards the end some 50 protestors joined for a photo we will send to Mumia.

FREE MUMIA – Free Them ALL! 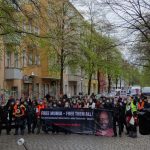