We are defiant! Defend Meuterei & Rigaer 94! 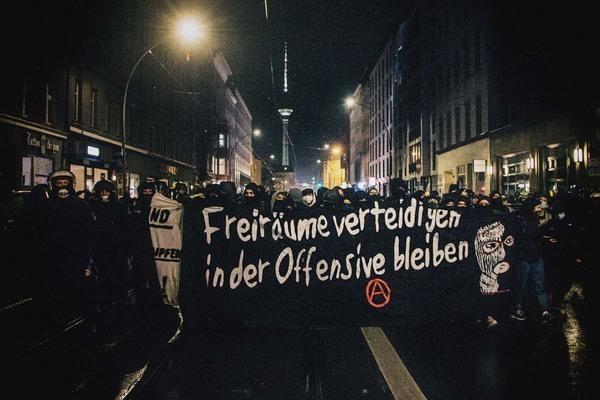 The escalation of social and political conditions can be felt acutely in contexts of struggle/movements across Europe. This has a clear connection to the Corona pandemic. Various governments unite in their creation of more authoritarian policies, as they increase control over their populations – specifically over those who oppose their plans, those who fight against the current trend towards a Europe with closed borders, towards right-wing conservative and fascist regimes and the mass repression of all progressive ideas.

Due to harsh repression against anyone who wants to move freely on the streets of Barcelona or Athens, governments have successfully imposed a wave of evictions. Resistance has been made almost impossible with violence and heavy fines. Freedom of movement and the right to demonstrate have been restricted to such an extent that even the smallest of resistance is swiftly beaten aback. In the Spanish State, especially in Catalonia, numerous projects have been evicted and autonomous structures destroyed – all during the last year of Covid. In Greece, the new government elected in the summer of 2019 announced in their election campaign that they would get rid of all anti-authoritarian projects. The implementation of this declaration of war was announced to start immediately after their victory. Various projects have been and are being forcibly evicted, the university asylum has been lifted and police units are stationed in the universities.

In Berlin we are confronted with mass attacks on autonomous projects and ideas. With the evictions of the bar Syndikat, the youth center Drugstore, the Wagenplatz Sabot Garden, the homeless camp at Rummelsburger Bucht and the eviction of the anarcha-queerfeminist project Liebig34 (https://interkiezionale.noblogs.org). This has all taken place in the context of the Covid pandemic, 2020/21. Red-Red-Green (Political party coalition colours) have been successful in destroying a culture of antagonism – a culture of resistance which took decades to grow. The course of escalation started by R2G against the remaining projects, houses and bars is being seamlessly executed.

On March 25, the bar collective „Meuterei“ one of the last affordable bars and a place of exchange and self-organisation, is to be evicted. Meuterei has existed since over 11 years. This eviction happens after a year of being forcibly closed due to Covid19 legislation. Support is hindered due to the fact that the collective are under special surveillance by State Security and even interactions in small groups are not possible without reprisals. Since its inception, Meuterei has positioned itself within struggles in the neighborhood against gentrification, racism and repression – actively taking a stand for those who can no longer afford the „new“ clean Berlin. Be it in the fight for the Gerhart-Hauptmann-Schule, occupied by refugees, or through regular social consultations. Meuterei is also an important part of the movement. A space where countless discussion events and solidarity evenings have taken place. A space where ideas of common struggle could be exchanged, planned and executed. Cops are unwelcome in the bar. It is a space where all those who want to treat each other respectfully can meet and feel comfortable.

We cannot count the numerous days and nights spent in the Meuterei, nor the amount of discussions and events. We urge those who want to destroy this space not to count our nights, but instead, to count their days. Attacks on our spaces and structures are attacks on our lives and will be defended consequently!

We can’t hear it anymore! The whining of the interior senators, the police unions, the politicians – whichever Party, the tabloid press and the self-appointed owners of buildings! The moaning rule of law, of non-violence, morality and horseshoe theories of social-bourgeois ideas of democracy!

The struggle for Rigaer 94 is not only the struggle of the residents against the cops, the district and the senate, it is the struggle of a radical-antiauthoritarian movement against all domination, against the madness of state control. It is part of a fight towards our ideals – ideas of a better and more “just”world. The wave-like intensification of this conflict is inherent to the context of struggle. In a State where property counts more than people, where you are only something if you have enough money to consume, and where everyone is encouraged to betray each other to climb a few steps up on the career ladder, there will always be rebellion.

Our struggle is therefore not just about the bricks and the mortar that holds the house together. We all associate discussions, political struggle but also emotional moments within these spaces. Aside from the apartments and the occupied open structures, the Kadterschmiede and the youth club are also central elements of the house. The project in its entirety represents the ideas that we fight for and that cannot be destroyed with bulldozer.

„In order to make clear that the eviction will be a damn expensive and stressful affair and that the bailiffs, the cops and the politicians have to consider again if they really want to go through with the eviction, there must be actions now. It must be shown to them that an attack on Rigaer94 is an attack on ALL of us. They have to consider if this stress and effort – considering too, the next threat of conflict on autonomous free spaces – is worth it for them.“

The current attempt to bring down Rigaer94 and thus achieve a supposed victory for the democrats will fail because of the hostility that we have against those who support this attempt.

The most recent attempts from the rulers to control the house ended in an offensive of solidarity against the city of the rich. We know that our enemies remember well the fires and glass shards that kept them from sleeping at night, the texts, posters, rallies, concerts and demonstrations that made their days miserable.

If Andreas Geisel thinks he will escape the political fate of his predecessor, he is not only making it too easy for himself, but is also failing to recognise both the seriousness of the situation and the reality he faces. Whoever wages a „proxy war“ on behalf of and for the benefit of the rich should be aware that there will be consequences. One consequence of the years of conflict around Rigaer Straße is not only the political death of former Interior Senator Henkel, but also a wave of solidarity far beyond Berlin.

The elections in September are an important event for Andreas Geisel. Here we would like to quote the friends from Rigaer94 themselves, as they have already found the appropriate words:

„As a projection surface for the generation of fears and the sale of securities in the election campaign, we promise all parties and others interested: If we go down there will be no winners.“

We will not wait for all the city’s hotels to be booked once again to provide shelter to cops from all over the world, for Aretin to complete his dirty deals and release one of the last houses of the East Berlin house-struggles to profit from it, for Luschnat to get himself a new suit for the boxing ring and for Kontraste to once again bring a hook.

We ourselves decide when and how we take to the streets and how we defend our projects.
As a part of the offensive to defend our structures, we call for a demonstration for 23.03.2021. The demo will start 18:00 at the Meuterei and end at Rigaer94. It is registered and instead of having speakers and music, we will convey the message with our voices and actions. We ourselves decide how much anger and passion will be expressed through this demonstration and it is up to us to prepare accordingly. 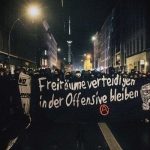